When I travel around the world (not half as much as I’d like to), I try to visit local kundalini yoga studios, even if I’m not familiar with the language. This was not the case in New York’s Kundalini Yoga East studio, located in 873 Broadway, very close to Union Square, as I can understand some English. Plus I had the opportunity to meet one of the first teachers sent around the US to spread kundalini yoga and the 3HO way of life: Sat Jivan Kaur Khalsa. 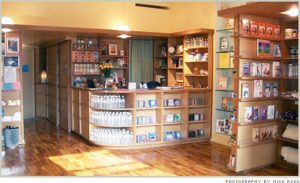 While I was somewhat unimpressed by the building’s entrance – never judge a book by its cover – I was totally taken aback by the sudden warmth of the studio itself, and was greeted with a ‘sat nam’ by a very cool guy with the tallest turban I have ever seen! There is a special warmth to the people attending, and I overheard some of them talking about Subagh Kriya – nice coincidence, as that’s my favourite. In the hall, there are a few original drawings by Yogi Bhajan himself, as well as a beautiful moquette. 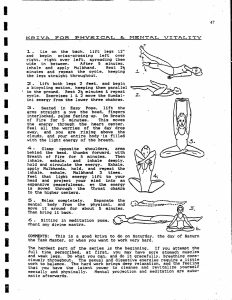 In my experience, when a teacher introduces a class taught by Yogi Bhajan in the early 70s, odds are you’re in for a rough time focusing on the lower triangle/ first three chakras. My intuition served me well, as it was the Kriya For Physical And Mental Vitality. Keeping up was very difficult, but Sat Jivan, while being very precise – mind about the angles! – is also very compassionate in helping us accept what we can (or can’t!) do. There is such a beautiful energy in this sangat, I really can’t describe it – you need to experience it for yourself.

Those who have been in contact with Yogi Bhajan have a special glow about them; there is something in their eyes revealing a form of happiness and contentment with who they are, no matter the age. Sat Jivan Kaur Khalsa is a wonderful example of wisdom and humility. She serves me tea with her own hands, and you can feel she puts all her heart even in such a simple gesture.

We talk about she started teaching in New York City in the early 70s, and she tells me that back then, the city was very dirty and dangerous, but it was also very cheap, and people came from all over the country to express their creativity. Also, there was the hippy movement, boosting open-mindedness and curiosity for Eastern philosophy. Sat Jivan remembers that there was only a single organic produce shop in the entire NYC, and they received only two boxes of organic produce every week, and they got everything they could, especially during Yogi Bhajan’s visits. Sometimes they had them shipped from California. At the time they taught kundalini yoga in five different universities, and classes were credited under Humanities.

I ask about her favourite kriya, and she answers without hesitation: ‘Sat Kriya’, then smiles and adds: ‘There are so many.’ We talk about her advice for new teachers, and she’s straight to the point: ‘Practice what you teach, keep it simple, and stick to the teachings.’ Sat Jivan Kaur also remembers the importance of teaching Yogi Bhajan’s sutras for the Aquarian Age as ‘they are the keys to unlock every situation’.

She stresses the importance of creating moments of community between kundalini yoga teachers as there should not be any competition among them. ‘When people ask me what sets apart my teacher’s training from anyone else’s, I answer: “I hope nothing, they should be all the same.”‘

As I listen to her, I find it hard to convey the simplicity, the humility and the truth of what she says. We also talk about the many students who learned from her and now are teaching all around the US. ‘In a way, this is true,’ she says. ‘But I really don’t have any students, I just happen to have people who study with me. People come here and attend the class for an hour and a half. I can see they do what they can, good or bad, but then I don’t know about the 22 hours of the day in which they are not here’. After all… isn’t being attached to the students one of the temptations of being a teacher? Sat Jivan quotes Yogi Bhajan: ‘No claim, no blame’.

We talk about the importance of building a sense of community among Kundalini Yoga teachers to avoid any kind of competition. This could work anywhere in the world, where there is a will to make it so.

She remembers about the times she went to Rome, the small cars and the flowers at every window… you don’t see many flowers in New York City after all. We exchange blessings and part.

I am extremely grateful for this beautiful conversation, very enlightening. Sat Jivan’s words are already an inspiration for quite a few teachers who I had the chance to share with since I came back to Rome. The most interesting effect though, is how her words changed me. What she said really opened my heart, and I am more essential as a teacher, and I am studying and teaching more the Aquarian Sutras.

And what about you? Do you visit other kundalini yoga studios when traveling?