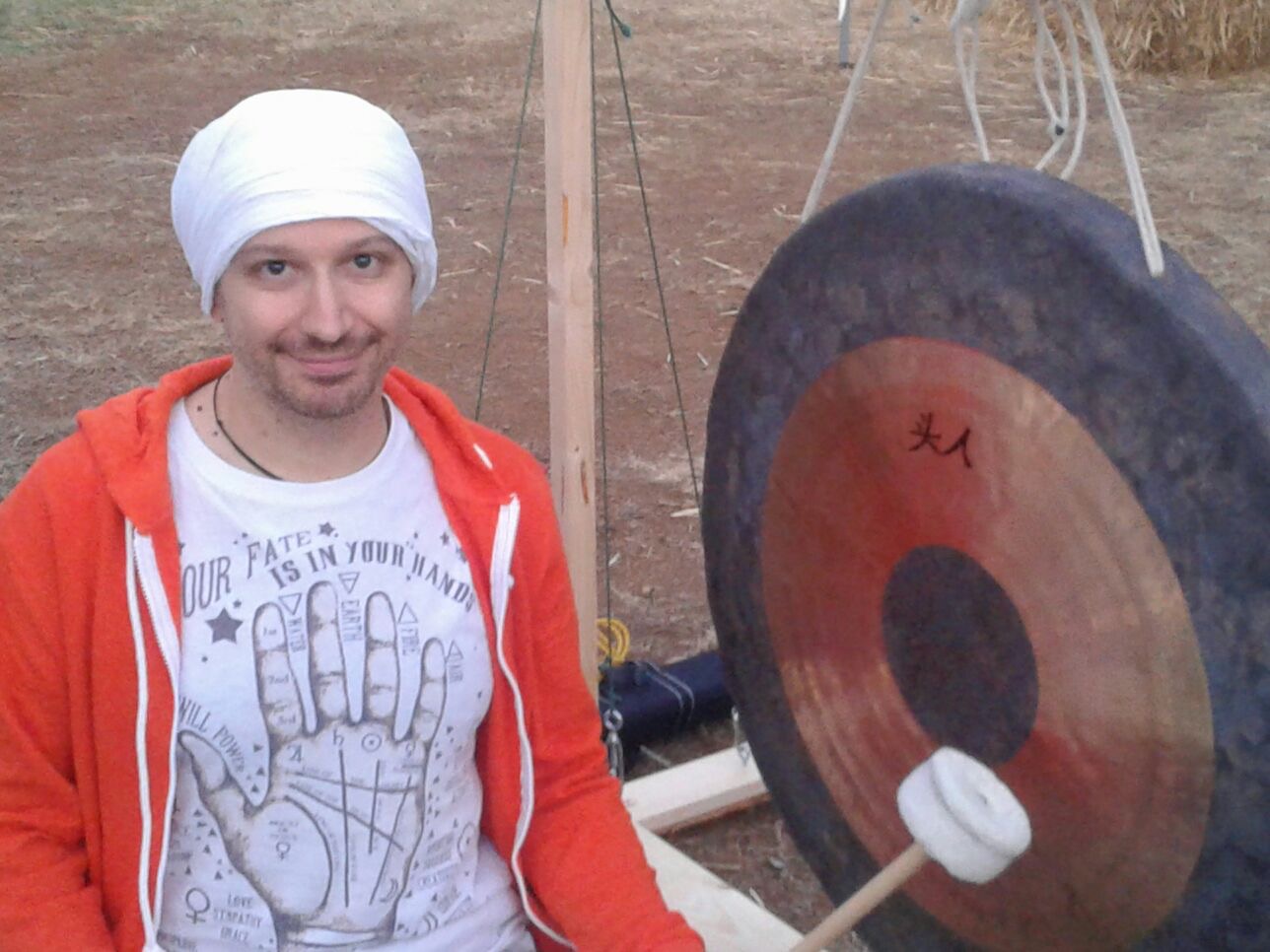 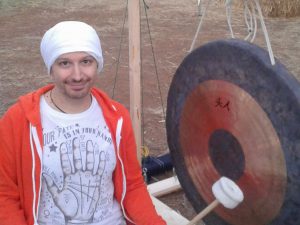 There have been a lot of big changes recently for Italian born kundalini yogi Mauro Corso aka Ram Nam. He married his love Irma (Ram Nam Kaur) with whom he’s living a yogic life along with their cats Penny and Prue. He just turned 44. And he’s co-founded the Centro Ardas Bahi kundalini yoga school in his hometown, Rome. And to add a few more feathers to his cap, he writes, plays the ukulele, piano, harmonium and gong, and is learning to create sacred jewellery and malas from his friend Rajdev Kaur. Meet Ram Nam…

How did you get into kundalini yoga, Ram Nam?
It was just about four years ago but it seems ages ago. I went to my doctor because my back hurt very badly around the scapular area, and she advised me to practice some postural gymnastics or yoga. Actually yoga was not my first choice: I tried first a course of postural gymnastics, but the class in my neighbourhood never started… so I looked for a yoga centre. At the time I did not know anything about styles – yoga was yoga, and I stumbled into a kundalini yoga centre almost by chance. It was Yoga Sangat, the centre founded by Hari Simran Singh Khalsa, one of the teachers lucky enough to know Yogi Bhajan personally and to learn from him.

How has it changed your life?
Well, I never had back pains again! I observed that yoga changed my life in many other ways. In no particular order: I seem to be more resistant to disease in general, and when I am ill (usually once a year or less), it only lasts a couple of days. I have noticed that my mind is generally more disciplined and, when talking to anyone I am able to weed out the useless stuff before I put it into words.

What does your yoga practice look like now?
I stick to 40, 90 or 120-day sadhanas. When choosing what to do next, I follow my heart and intuition rather than logic and so far this has worked very well for me. Usually my practice lasts for an hour, but it can be less than that… there are extremely powerful kriyas I can practice for 9 to 15 minutes. I never underestimate those.

What’s your favourite kriya?
I love many kriyas, but Sobagh Kriya really stays in my heart. I practiced it a year ago with the woman I married, and I discovered it works on many levels and in many unexpected ways. The Sobagh Kriya to me is one of the greatest gifts from Yogi Bhajan, because it is not just about attracting prosperity, but about becoming prosperity for everyone we touch. It is more than a goal, it is a state of being.
Currently I am in love with Pauri 33 (Aakhan Jor), and I would like to practice it for the ultimate goal: 1000 days! If I manage not to forget to do it, it will be done by 19 July 2019. 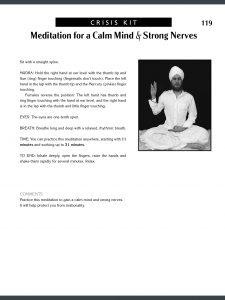 What’s been the most powerful practice you’ve ever done?
Earlier I talked about having a more disciplined mind. A meditation found in the KRI emergency kit (and in the Stress And Vitality TT2 module) was pivotal to this transformation. I practiced the Meditation For A Calm Mind And Strong Nerves for 31 minutes every day for 90 days, and for me it was life changing. It might seem silly, but before that I used to post a lot of opinions on Facebook about almost anything, and after some time I noticed I stopped doing this. I simply felt that my opinions were not as important as before. It is a powerful meditation, very difficult. During the first few days I often experienced bursts of rage, but it was just part of the process. I am always fascinated by the effects of meditation on unconscious and subconscious levels. I really feel like I am experimenting on myself and learning every day something new.

Can you tell us how your Gatka practice has influenced your life?
I am learning Gatka from Guru Shabad De Santis, and as I delve more and and more in this practice I understand how everyone of us (at any age) should practice a martial discipline. I observed that Gatka is particularly suited for this era because it was designed to defend against multiple attackers in a continuous and harmonic motion. On a subtle level Gatka teaches you to resist everything you face during your lifetime, and in communication it gives you the gift of being straightforward: you learn to say ‘yes’ or ‘no’ only when you really mean it.

Fave quote? The first Sutra of the Aquarian Age: Recognise that the other person is you.

Book? Tolstoj’s War and Peace. I was so enthusiastic about it when I was 17, I suddenly decided to learn Russian.

Place? There is a house near Tarquinia, in a place called Marina Velca. It was always a safe place for me, ever since I was a child. I would like to organize yoga retreats (or advancements, as Yogi Bhajan most poignantly called them) there, somewhere in the future. It is a lovely place on the top of a few hills, enclosed by pines and not very far from the sea. It is very peaceful and calm, a balm for the heart.

Teacher? I have four teachers: Shiv Charan Singh Falasca, who inspired me to become a teacher with his example, Guru Shabad De Santis, my lead trainer in both teacher training levels 1 and 2, who is a treasure of experience and wisdom (and Gatka master!) and last but not least Sujan Singh Calamita, who is the most compassionate, humble and giving teacher I have ever met. The fourth teacher is not a yogi, but a photographer: my brother Stefano, who taught me a lot, sometimes even without realizing it. He is really a great teacher.

What’s on your altar? Actually I don’t have one, but I have everything I need, I just need to do it: there is a Sri Yantra, a picture of the Holy Virgin with Jesus my mother gave me a long time ago, a small statue of Ganesh to remove every block, the tantric picture of Yogi Bhajan for trakakam meditation, and hematite prayer beads (rosary) a catholic priest (Padre Vincenzo) gave me a couple of years ago. Also there are a few pictures to honor my golden chain of teaching: there is me, Shiv Charan, Hari Simran Singh Khalsa, Guru Meher, Yogi Bhajan and Sant Hazara Singh. I feel that keeping in mind where we are in the golden chain is very important.

Kundalini yoga song/artist? I love Sada Sat Kaur, every album, but Mantra Masala has a special place in my heart. I often play the fast version of Gobinde Mukande when there is some wild dancing during class and Wah Yanthee during relaxation.

Find more information here: http://maurocorso.wixsite.com/ardas. Mauro Corso wrote the novel Lo Sguardo Inatteso (The Unexpected Glance) with some plot help from his wife. It’s about an Italian architect living in London struggling to find meaning in her life, and describes a beginner’s perspective of the Heart Of Gold Kriya