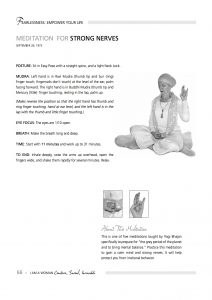 I didn’t realise I was an angry person. It took a kundalini meditation for me to see it. It was during the Kundalini Yoga Teacher Training Level 2 Stress And Vitality module. We did the Meditation For A Calm Mind And Strong Nerves for 31 minutes. Let’s be honest: it’s not the most complicated meditation… and yet, something happened to me around halfway through. A sense of meaningless anger like I’d never felt before arose. It was like a pure surge of raw rage building up in every cell of my body. All I wanted to do was  stop meditating and quite literally smash every object before me – that seemed like the only way to burn all the anger out.

Fortunately I didn’t want to harm any of the yogis practicing with me, and I stayed through the practice until the very end. After the meditation, I asked my teacher about my feelings and he said this was not surprising at all. I know on paper this meditation is supposed to promote a ‘calm mind and strong nerves’, but sometimes this path is not without strange detours, and sometimes it takes quite some time to get to your destination.

It’s not uncommon to experience dark emotions like anger or fear (I have experienced the latter, and believe me, it’s scary) during kundalini yoga meditations. I know Star Wars buffs will object, saying these emotions lead to the dark side, but in my kundalini yoga practice, I have the impression that they are just phases, and if I go with them without blocking them, eventually they pass.

That’s why I decided to practice the Meditation For A Calm Mind And Strong Nerves for 90 days.

During the first 20 days, I felt that anger steadily. But then something happened inside me, like a sense of inner peace. As I have already pointed out, it was not a straightforward journey. Every now and then that sense of rage and frustration would pop out, but at the very least I was starting to know better than to get angry at myself for my own anger.

Then, after 40 days, something happened during a class I was teaching. All the students agreed that simply sitting before me put them in a very calm mood, as if my simple presence was therapeutic. I knew it was from the meditation.

There was one question left: Why so much anger? I can only suppose that it’s something to do with my childhood. Often little boys don’t have many choices when it comes to expressing emotions (remember ‘boys don’t cry’?). I don’t think this is to do with family, but rather with the cultural norm in which you are raised to be a man.

In Italy where I was raised, crying (which was actually my first reaction as a child), was often frowned upon, especially at school, while a display of anger was totally approved of, as long as it was ‘within boundaries’. To some people, an expression of anger was proof of character!

Right now, that seems ridiculous, but when I think this forged my character, I stop laughing. There must me more to masculinity than bumping chests and bashing heads, so to speak. So I decided that my journey was about finding the true sense of being a man. There is no cliffhanger here: do not expect a simple answer any time soon.

My journey is far from over. This is only ‘Part One’… so be assured there is going to be a ‘Part Two’, with a meditation specifically addressing anger. 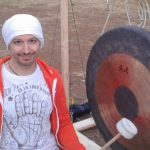