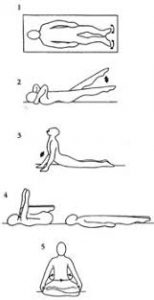 Ahhh, just look at that lovely kriya! It’s the Kriya for Detoxification, such a great mixture of supine, sitting and standing postures – and it does what it says on the tin. It’s a fastidious cleanse that flushes out the glands, internal organs and emotions. Recently I embarked upon a physical detox with the green fast, and decided to support the process with the Kriya for Detoxification…

As the days wore on (as in, by day three), I was becoming extremely sleepy after my morning sadhana, specifically after savasana… it was seriously tough to come to my cat stretches! Then I’d yawn my way through my kirtan kriya, and through my green breakfast, until by lunchtime I’d be starting to recover.

As the days wore on, I started needing a 10-minute nap after breakfast. Rather than my usual post-kriya, energised glow, I felt totally shattered. By the time day 10 swung around, I couldn’t even get up from savasana, and had to take another 20 minutes of sleep on the mat. It‘s not that I was scrimping on savasana, either – it was a good seven minutes!

Of course, it was probably the combination of Kriya for Detoxification and the green fast, right? My body obviously needed more sleep as it focused on the tough work of releasing toxins from deep in my body’s systems. That’s what I would have thought, too. Except Nish, although he wasn’t following the green fast, was doing the kriya with me. And like me, he was also completely shattered after savasana, with that feeling of utter exhaustion growing each morning.

So what is it about the Kriya for Detoxification that works on activating the parasympathetic nervous system so strongly? See that cobra pose in exercise three? It’s a longer pranayama/movement that works on squeezing excess adrenalin from the kidneys as well as stimulating the vagus nerve and soothing the parasympathetic system… a recipe for snoozing.

So, by day 11, Nish and I decided, as much as we love the Kriya for Detoxification, it’s best done in the evening! We’ve moved onto another kriya for our morning practice, and it’s back to that lovely, vibrant, post-kriya glow. It’s a great reminder that living in the high-octane metropolis that is London, we do need more downtime to rest and recharge. In fact, remove London from the equation, we ALL need more downtime to rest and recharge. Take it slowly, loves!