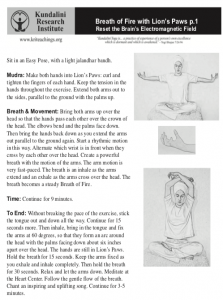 I’ve been going through a tough time, lately. During my twenties, I suffered with depression – not clinically, just the kind of sadness, lostness, flatness that most of us experience at some point in our life. Once I landed in the kundalini yoga saddle, and especially since it blossomed over the years from a weekly class to a daily practice, the depressive tendencies got left behind. Phew.

Until recently. I picked up a 40 day kriya – a very powerful one called Breath of Fire with Lion’s Paws. And I started to get very depressed with it. As each day went by, I’d feel flatter and flatter, until by day 20, I was waking up practically crying. It was a stark reminder of how I used to feel in those bad patches in the old days.

I suspected that it might be the Breath of Fire with Lion’s Paws. It works on the electromagnetic field of the brain, so perhaps my daily practice was upsetting the apple cart.

Now, as those who follow this blog will know, I NEVER give up on a kriya! I’ll see it through at least for 40 days, no matter how tough and uncomfortable it gets. But this one… sheesh! I wasn’t sure I’d be able to keep going. Nevertheless, I stuck with it, feeling more and more miserable, until on about day 25 I was smacked down with the most excruciating headache.

I’ve never experienced a migraine, and I don’t get headaches unless I have flu. But this one? Ow ow ow! It was so strong I threw up! It lasted into the next morning, so I couldn’t physically do the Breath of Fire with Lion’s Paws. So that was my decision made for me! It subsided later in the afternoon, so I could still do my kirtan kriya – nothing is turfing me off that particular patch!

Since I stopped Breath of Fire with Lion’s Paws, my mood has bounced back considerably and the headache hasn’t been seen since, so maybe it was the right choice for me…