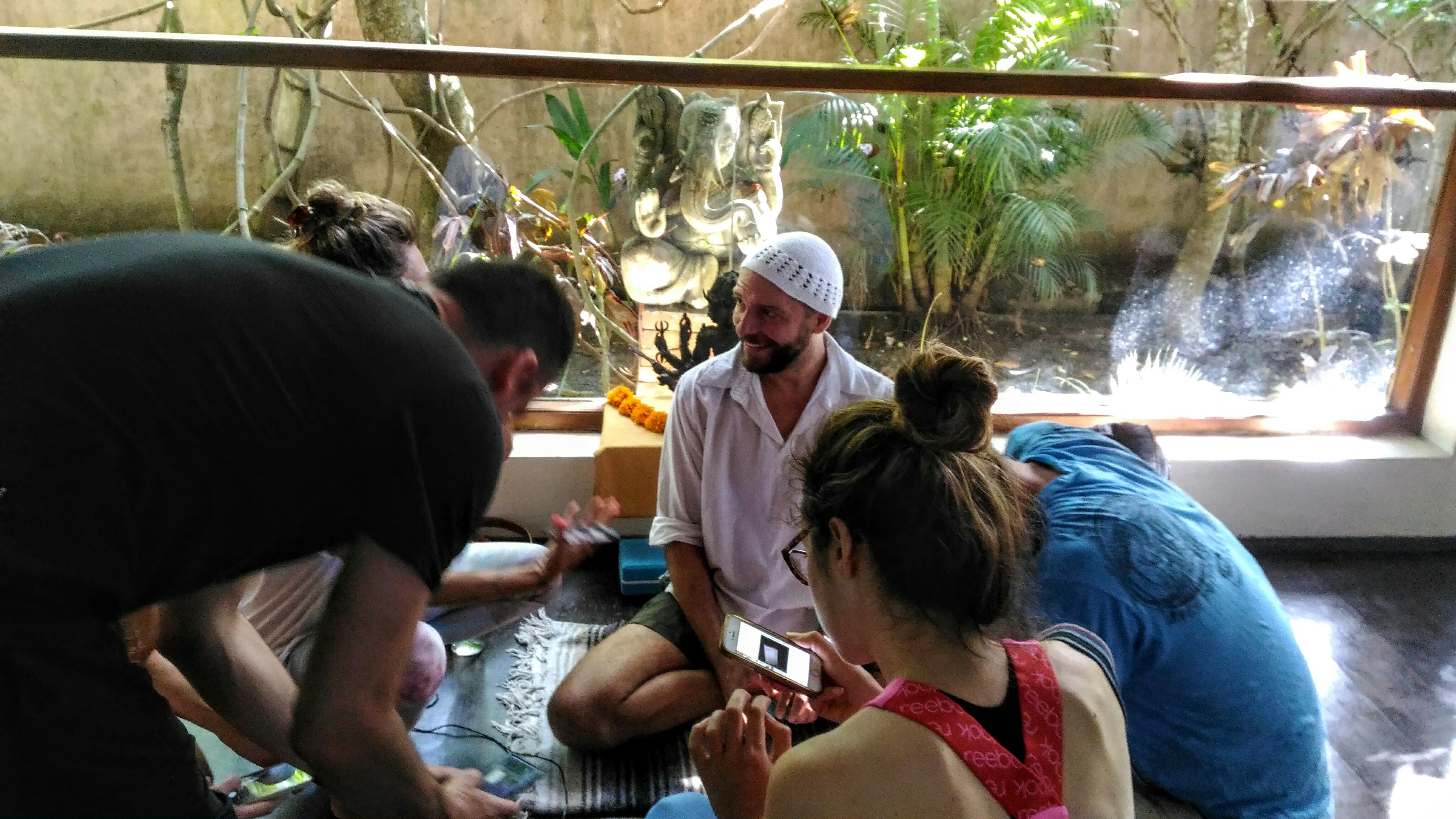 Jen and Gabriel met each other at a kundalini yoga class at The Yoga Barn in Bali earlier this year. Jen is pretty new to kundalini yoga, and it was Gabriel’s first ever taste of it, and we decided to collate their first impressions… So Jen and Gabriel, how was your experience? 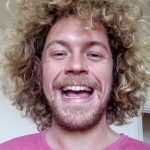 Gabriel: In a nutshell… powerful, love, oneness, unity… I don’t know which word to choose.

Yoga is all still fairly new to me. I’d heard about kundalini yoga from friends. I was not quite sure what to expect – all the information I had was a bit confusing. And that’s where I met you, Jen. 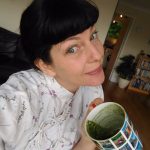 Jen: I remember that class and feeling all shiny and bright-eyed at the end of it. Kundalini yoga is still pretty unfamiliar territory for me, too. I do love it, as do I love many forms of yoga. My daily practice has its roots in Hatha though. The main reason I practise is to bring me into balance, quiet my mind so that I can sit/be home in the heart. Reconnect or stay connected to Self. So far, kundalini yoga has given me that, in a very sparkly blissy way, via some hardcore kriyas requiring determination and lots of persistence. So what did you make of it, Gabriel? 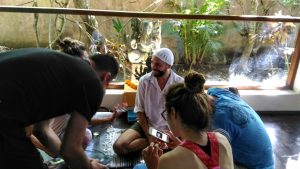 Gabriel: We had a really good teacher in Bali, Greg Kaps (pictured left), who I think made kundalini yoga accessible to us. All the kriyas were very simple but very effective, really shifting things energetically. The effects would usually start to happen around two thirds into the class. On a hard day, I’d be distracted by thoughts while doing the kriyas, but then ‘the thing’ would happen right at the end.

Gabriel: Yeah, the end of any negative or toxic thoughts that I might have been having before. This was a very transitional time in my life when I was releasing a lot of stuff. I was getting very emotional. So with the kundalini yoga, I was  full of love. I was at peace with myself and others and this would last a good few hours during the day, just like being on a little cloud of happiness. I was not as judgemental and really more relaxed.

Jen: Mmmhmm, I can relate to that to that little cloud.

My first kundalini, rather mind-blowing, experience was one of my favourite birthday presents, from Gem actually. She treated me to a class at Alchemy in London that was followed by a gong bath. I didn’t walk away from that, I floated.

I liked how everyone was dressed in white, the lighting and energy in the room were soothing and such beautiful music! I felt quite moved even before we started. The soothe was shattered by how unexpectedly vigorous the kriyas were, I think it was called nabhi… I remember wondering if some of the kriyas would ever end and how on Earth the movements could possibly have the effects the instructor suggested they would. I was thinking ‘never again’. But by the end of the class, all of me was singing. Quiet mind and my body in a bliss buzz quite unlike any other.

Gabriel: It can be weird. 35 people in a room, breathing like dogs with their eyes closed. But if you are ready to experience and just feel what’s happening then it’s not going to be weird anymore. It’ll become magic 😉

Hard? Some kriyas can be but Greg proved to us (in teaching what he termed Kundalini Lite – because of the nature of Ubud and his students he understood the practice was quite short and needed to be quite grounding) that kundalini yoga doesn’t have to be difficult to be effective.

Ugly? I guess if you brought newcomers into that state you could use that to get them to believe that that state is coming from something other than themselves, the all pervading, the ALL. Grace is a word I heard used. We just channel it, amplify it and feel it with our physical, emotional and spiritual body.

Jen: I love what you just said, Gabriel. Yes to all of it in my opinion too, adding that I feel although it is all in you, the vibe of the teacher plays a role too, they really can help to bring you into that space. Hold space for you to let go into it…

Kundalini is very special and powerful and I feel blessed to feel so welcome in kundalini yoga classes. I love mantra and devotion and who doesn’t love bliss? But I don’t feel I’m about to drop ‘Om Namah Shivaya’ for ‘Ong namo guru dev namo’  and call myself a kundalini yogi. How about you Gabriel, do you see yourself becoming a kundalini yogi and wearing white?

Gabriel: No, why would I want to stick a label on my head? I do believe in the colour thing though.. Although it didn’t stop me from having ecstatic states with my awesome Marvel Wolverine T-shirt. 😀 😀 😀

Maybe some people need it?

For me kundalini yoga is a powerful tool that I can use but not a way of life. I believe in diversity, even and especially in spirituality.

Thank you so much for sharing, lovelies! Sat nam x