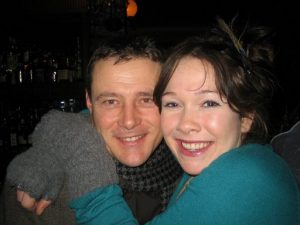 Last week, an old friend took his own life. He was 51, and so very bright. He lived life right on the edge, following his wanderlust (and his paraglider) to India, Japan, Burma, Bali. He was hilarious, big-hearted and fun, and he lived to the absolute hedonistic max – and sometimes it was exhausting… even for him.

He hid his manic episodes well. He would lurch from dizzy heights to heavy lows, and in those lows, he was lost. I witnessed the (what he called) ‘dark’ phases whenever we spent longer periods of time together; when we lived together in India, when we travelled in Japan, when he stayed with me in London, and when I visited him in Wales. He kept this ‘darkness’ to himself, but I could see it when it arrived – it snuffed his light clean out and he’d retreat deep into himself. And I knew it was this ‘darkness’ he was trying to drown when he drank too much.

I hadn’t seen him since 2013 – life had taken us in different directions – but when I discovered through a mutual friend that this beautiful soul, shining ever so brightly in the night of his own darkness, had suicided, it felt, to coin a cliche, like a light going out. Yes, he’s free of that aching, all-consuming, heavy darkness. But, selfishly, the world has lost such a bright spark who brought so much joy and delight. And it will never quite be the same world again.

In kundalini yoga teachings, we chant ‘Akaal’ for those who have passed on. It means ‘immortal’ or ‘undying’ and the vibration of this word is said to help passed souls find their way ‘home’ to the oneness that they already are. And so I’m chanting Akaal for Alun. When I’m not chanting it out loud for the cursory 11 minutes a day (the minimum requirement is 11 minutes a day for three days, optimum is five people or more changing for 31 minutes for 17 days, starting at the time of death), I’m chanting it in my mind to support him in his passing.

‘Akaal’ has become my mantra over these few days following his death, and I’m not sure who it’s helping more… Alun, for his soul to find its way, or me, who is able to move towards some kind of relief that I am doing something, anything, to help him in a situation in which I feel totally helpless.

Akaal – it breaks the boundaries, it breaks bondage, it frees us to reach the One who brought us here.