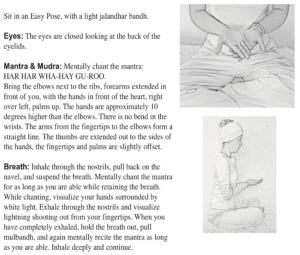 For a direct experience of kundalini rising, do 31 minutes (at least) of Tershula Kriya. And if that glorious energy doesn’t arise in the first sitting, she will in the next, or the next after that. Keep going. Kundalini rises in Tershula Kriya, whether you sense her or not… and I’m pretty certain that eventually you will sense her!

When I started 40 days of Tershula Kriya, I was decompressing from finally handing in my MA dissertation. I wrote my paper on Kundalini. I analysed how kundalini developed from her earliest roots in the RgVeda to the ‘Serpent Power’ in Arthur Avalon’s early 20th century work. Most of my deep diving was done in the medieval tantras.

The beautiful thing about Tershula Kriya is that I got to experience many of the things I had read about in these tantras. The sudden rush of that bright, vivid energy surging up through my being. The cool nectar flooding my body from my skull. The infinite expansion.

In the early days of this 40-day journey, I found the experience terrifying. I was overwhelmed by psychedelic visions. It was beautiful, but at times, I felt as if I had completely lost my bearings. Warnings from writers such as Gopi Krishna chimed with my misgivings. Nevertheless, I bore on, trusting the process.

Eventually, around two thirds into the six week daily practice, the intense psychedelia faded. It gave way to an experience of sublime divinity. Each one of those 31 minutes of Tershula Kriya was a window through which I would bask in the presence of god/dess. The trishula (tershula) is the trident that Hindu god Siva carries with him. It represents the three gunas – sattva, rajas, tamas – which interweave to form the basis of our reality. In Tershula Kriya, we create a mudra that echoes the shape of this trident and a visualisation to accompany. It feels incredibly powerful.

It was my dear friend Ursula who set me on the course of a 40-day Tershula Kriya journey. She has committed to an extended practice of it. I first met Ursula in our kundalini yoga teacher training in 2009. We lost touch until 2018 when we bumped into each other with happy synchronicity on Lakshmanjula Bridge in Rishikesh. Rishikesh is at the foothills of the Himalayas, considered to be Siva’s home. His trishula is everywhere. Ha! Ursula, I am eternally grateful, and it was a joy to share this 40 day trip with you.

PS I have learned that not everyone experiences Tershula Kriya through psychedelia! Nish did this meditation with me a few times and did not experience the same rushes of energy or vivid visions. I guess I just needed a little more rewiring than he did!