The Indra Nittri Meditation is named after the all-seeing Hindu god Indra – he is covered with 1,000 eyes to represent his omniscience. It follows, then, that this meditation is all about developing omniscience – aka intuition. I picked it as it coincided perfectly with an online course that I was doing at The College of Psychic Studies – Developing the Intuitive Mind. I thought it would be an interesting process – and it absolutely was.

My intuition amped up quite astonishingly during these six weeks. People popped up in my mind before they called or emailed, I knew what people were thinking and feeling before they shared with me. But where I really saw it was in the course. We were paired with each other for mini practice sessions, and I was astounded as I heard myself telling my partner about where they lived, their job, their circumstances – all which they affirmed to be true. It was extraordinary – and a huge lesson in trusting my inner knowing. The more it proved right, the more I trusted it.

I can’t say if it was the course or if it was the daily 31 minutes of Indra Nittri Meditation, but I feel it was both. They worked so well together – one of life’s delightful synchronicities! As my journey into the six weeks of the meditation and the course progressed, I found my intuition and my trust in that intuition growing stronger by the day. It really is a super power!

Interestingly I also happened across Indra quite often in this six-week journey. He’s not a god I have connected with much. However, he popped up in a talk I attended with visionary artists Alex and Allyson Grey. He also showed up in a book I was editing, and a new rug was delivered with the label ‘Indra’! The theme of eyes followed me around these six weeks, too – it’s come to be an in joke 🙂

In short, I heartily recommend the  Indra Nittri Meditation, and I also recommend Developing the Intuitive mind at the College! Both extraordinary journeys, and when taken together – oh WOW! 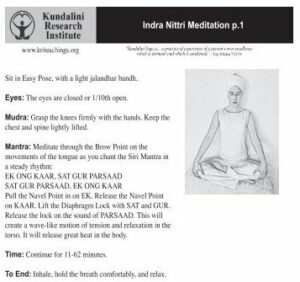